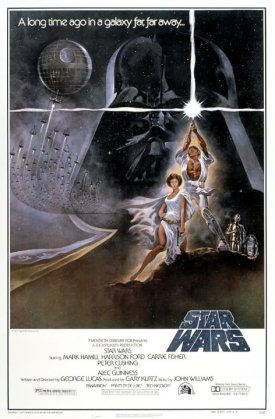 After almost two and a half years of blogging on Express Elevator to Hell, at last we’ve come to this; when I first started this site in 2013, I rattled off several reviews of my favorite films that I considered the best and/or most entertaining I’d ever seen, but unfortunately those early choices were geared solely toward films I’d seen later in my adolescence and early “adulthood.” My blogging habits subsequently gained steam and I moved to new release film reviews and coverage of foreign films I had started to get into at the time; many of my early childhood favorites were ignored until recently, and now finally we’ve come to one of the most influential films in American pop culture, in the history of cinema worldwide, and one of the biggest movies that changed my life forever: Star Wars.

Watch your step; this place can be a little rough.

There’s only one other film that arguably influenced me more than the original Star Wars trilogy (1977, 1980, 1983), but we’ll get to that at a later time. I saw this trilogy when I was very, very young —- so young that it’s hard to remember a time when I didn’t know the Force, Luke Skywalker, Darth Vader, Han Solo, and the Millennium Falcon. The film’s canonical universe is so ingrained into my brain and larger persona that it’s impossible to think of my own life or greater American pop culture without it. Even those mindless, ignorant brats who are my millennial generation brethren who haven’t seen or fully appreciated Star Wars yet are affected by it every day, both directly and indirectly, in the annual pop culture pastiche they consume; Star Wars not only changed the American film industry overnight, it changed cinema history forever and has become a pop culture phenomenon for decades, a milestone of creative achievement that shows no signs of slowing down as we await the much anticipated Star Wars: The Force Awakens (Q4, 2015). Hopefully, it won’t suck….like the last three Star Wars films did…

In any case, Star Wars changed me forever and for the better, and not because I was young or naive or easily impressionable (which I certainly was), but rather because it and its sequels (not prequels!) are amazing films. I’ve watched them numerous times over the years, including the original 1977 masterpiece just minutes ago, so trust me —- they still hold up.

It’s been said many times and in many different ways that George Lucas probably gets far too much credit for single-handedly “creating” Star Wars. He can certainly be thanked for that initial creative spark, but the man has always been more of an abstract, brainstorming “idea-machine” rather than any sort of coherent screenwriter or actors’ director. I got a lot of respect for the guy given the shit he went through making the first Star Wars (the 1977 film was plagued by production problems), but the fact of the matter is that SW as a whole was an artistic project conceived through compromise and collaboration with many artists — not just George Lucas. The man didn’t even write or direct The Empire Strikes Back (1980) or direct or principally write Return of the Jedi (1983), and do I really need to remind everyone how the prequels (1999, 2002, 2005) turned out? I’d rather not think about them right now. 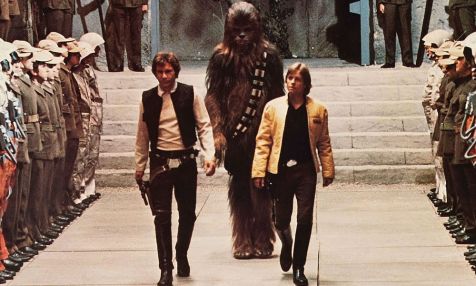 The scoundrel, the muscle, and the golden boy… the best use of stock characters in 20th century pop culture.

The original Star Wars (later renamed and “Episode-numbered” to IV: A New Hope) was rewritten numerous times from George’s incoherent first drafts, virtually saved in editing by Paul Hirsch, Marcia Lucas, Richard Chew, and producer Gary Kurtz, and was in many ways enhanced by the limitations of the then groundbreaking special effects by Lucas’ recently founded Industrial Light and Magic. Again, I got nothing against Lucas, personally, and he did lead a great effort to bring the vision of Star Wars to the big screen, but let’s just all admit that the original Star Wars trilogy is not the best example of the auteur theory. Hell, if anything, Star Wars (along with Steven Spielberg’s earlier film, Jaws [1975]), destroyed the mainstream American auteur of the 1960’s and ’70’s…and ever since.

Star Wars itself, though, in its original unaltered form, is a great film regardless whoever gets the most “credit” for creating it. While it essentially destroyed the American New Wave, its recalling of grand, classical Hollywood storytelling and adventure serials, its way of boiling and blending them into a sort of new age science-fiction/fantasy-western, is the height of surrealist creativity and cinematic originality. Compared to the generally heavy and boring (according to some) or artsy and avant-garde (according to others) science-fiction films of the time, Star Wars was a radical game-changer that struck the movie-going world (and especially its native United States) at the perfect time. The Vietnam War had been raging for over a decade and was finally coming to a close, Watergate had disillusioned our political climate, and people needed an escape. Enter Star Wars, a good ole-fashioned simple story that the general public could relate to.

Though high-concept proto-blockbusters had existed in some form before 1977 (e.g. D.W. Griffith’s Birth of a Nation [1915], Victor Fleming’s Gone with the Wind [1939]), Star Wars broke Hollywood and established the wide-release mainstream film as America’s cinematic bread and butter. Every single mass-audience pandering blockbuster released since then owes a debt to Star Wars in some way. Star Wars wasn’t just an influential blockbuster, it remains the definitive American blockbuster experience. 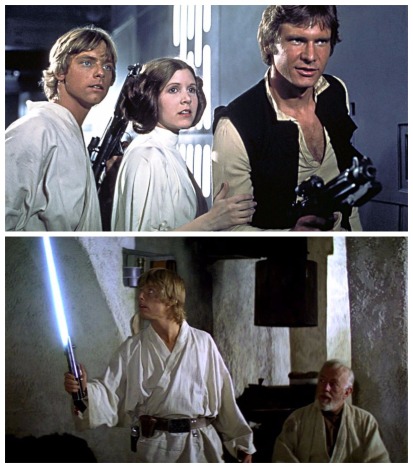 Top: Our original triumphant trio of misfit heroes. Bottom: Welcome to the Force, Luke. It will always be with you…

Another way of putting it is that Star Wars is vintage monomyth, the “The Hero’s Journey” that Joseph Campbell recognized in his 1949 book, The Hero with a Thousand Faces. Exploitation of this universal archetypal story-structure is how Hollywood has made its billions, and Star Wars is the epitome of that. You can pretty much follow Campbell’s monomyth beat-for-beat and explain Star Wars‘ narrative structure. In many ways the blueprint is hopelessly derivative, but then again the vast majority of human storytelling is unconsciously, subconsciously, or consciously based on this formula, and Star Wars is commendable based on its flawless execution of that formula, alone. To that end, the genre-blend flavor of Star Wars is so unique and original that any criticism of its rejection of New Hollywood filmmaking comes across as hopeless arthouse-butthurt. It’s fucking Star Wars, people, show some respect!

Star Wars‘ narrative unfolds so organically and executes the definitive monomyth almost effortlessly, as if it came into cinemas to establish itself as the definitive hero’s journey of our time —- which it pretty much is. The film is paced to near-perfection, expanding from that unforgettable Star Destroyer-opening and the droid escape-prologue into Luke’s vintage underdog-protagonist story. Then you have your call of duty, the refusal of the call of duty, the destruction of innocence, and the rapid expansion of the story into mythic proportions.

The young hero on a journey and the classic battle of good vs. evil, that is what Star Wars is all about. It’s inherent formula may be the single least original thing in art history, but its execution of it is anything but, and that artistic execution is the thing that matters. Though several special effects haven’t aged too well, Star Wars as a whole still holds up after nearly forty years and endless waves of CGI-revolutions. In many ways the visuals feel more raw and more real because of their limitations and the way Lucas had to direct around them, relying on them to aide the storytelling rather than replace the story altogether (…as the prequels did).

Though in hindsight the main characters of the first Star Wars were in their creative infancy, their sympathetic nature is integral to the story’s appeal. Luke is young, bright-eyed, and bushy-tailed, and quite whiny, as is his then undiscovered sister, Leia; their dialogue isn’t the greatest, but it works well enough and Harrison Ford’s highbrow, charismatic performance as Han Solo lights up every scene he’s in. Strangely enough, Prowse’s Darth Vader isn’t much more than your average thuggish bad-guy in this first film; he’s basically just an asshole in a robot suite, and that functions just fine in this simple space-adventure tale. His relationship with Guiness’ Kenobi is an intriguing tease, but it doesn’t stretch beyond that until Empire Strikes Back. It was a simpler time I guess.

There’s really not much more to discuss with the phenomenon that was and still is Star Wars. I think I’ve hit all the major points regarding its unmovable pop culture status — its creative “godfather” George Lucas, its recollection of classical Hollywood filmmaking and monomythic storytelling, its unforgettable archetypal characters, and its groundbreaking yet still limited special effects. A full discussion of its pop culture influence could last thousands of words further (and I sort of already did that in my first blog page), but I sampled the major bits.

Bottom line: If you haven’t seen Star Wars and you don’t consider yourself the kind of person who lives under a rock, go fucking see it immediately. What the hell’s wrong with you? I don’t care if you’re not American or are a first-generation American or don’t even like movies —- if there’s one single American pop cultural milestone you should see (and appreciate!) from the entire 20th century, it should be this. I’m not saying everyone has to love or even like it (though not doing so is indicative of a heart of stone and/or a hatred of fun), but everyone should appreciate the masterpiece that is Star Wars. Go and see it now if you haven’t, or rewatch it if you already have —- and then watch Empire Strikes Back (1980) and Return of the Jedi (1983). And never, ever, ever, ever, ever watch the prequels!

Star Wars: Just too many iconic moments to list!

— However… much of Hamill’s and Fischer’s dialogue leaves a lot to be desired. Some special effects do show their age.

—> Star Wars, in case there was every any doubt, comes HIGHLY RECOMMENDED.

? But make sure they’re the original, unaltered versions of the original trilogy! Stay away from any and all “special editions”…