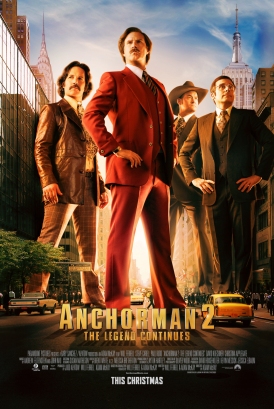 Released over nine years after the debut of the original Anchorman: The Legend of Ron Bergundy (2004), the long-awaited sequel to the Will Ferrell/Adam McKay cult favorite has finally arrived with more newsreel gags and Brick Tamland awkwardness to go around. I am a fan of the original Anchorman, perhaps not a die-hard follower, but a fan nonetheless, and remain surprised at how long Paramount Pictures waited to have another go at the legendary San Diego news anchor and his team of misfit weirdos. The first film was successful, grossing over $90 million (back in 2004) and is regarded as one of Ferrell and McKay’s funniest films. While I’ll always be partial to Talladega Nights: The Ballad of Ricky Bobby (2006), I enjoyed Anchorman and thought that, of all the unnecessary, repetitive, brain-dead comedies Hollywood churns on a yearly basis (e.g. Adam Sandler movies, Seth Rogan stoner-flicks, Tyler Perry blaxploitation comedies), an Anchorman sequel was one of the few I would actually welcome. And yet we had to wait over nine years for it.

The boys are back.

Anchorman 2 (A2) is fun at times and worth some good laughs, but all in all, this sequel was not worth nine years of anticipation. While the original somehow nailed the trickiest of balancing acts between dumb and funny, many times in fact being so funny because it was so dumb, much of Anchorman 2 is merely “dumb.” People who consistently flock to the cineplexes to see the latest Adam Sandler schlockfests may garner more worthwhile returns for their ticket investments, but for fans with levels of intelligence beyond that of an immature adolescent, many of the gags in A2 will fall flat. Don’t get me wrong, A2 is nowhere near as pathetic as the average Sandler-outing, yet much of the writing in this sequel doesn’t hit as hard as the original. Most of this letdown comes from outright laziness on the parts of Ferrell and McKay. Large sections of the script are just unforgivably juvenile and lack any sense of intelligence, charm, or wit.

For instance, the second act of the film where Bergundy succumbs to the consequences of his arrogance and boasting (much he like did in the first movie) is bloated with unfunny skits that go on forever. The main premise of the second act is that Bergundy goes blind after a session of figure-skating goes wrong, and afterward the titular character retreats to a lighthouse to live out his life in exile. This tiresome act is as stupid as it sounds, and continues along a predictable path that ensures we have to wait forty minutes before Bergundy’s sight is restored and the cliched character development takes place. This section is the low-point of the film, and is representative of the movie’s problems as a whole.

Satire is what made the original Anchorman work, and it’s what makes the better sections of A2 funny enough to save the sequel from its more degenerative parts. The primary thesis of A2 is how Bergundy and his team “revolutionize” the American news industry by switching their 24-hour news network’s agenda from telling people what they need to hear to what they want to hear. In other words, The Legend Continues makes the genius move to poke fun at the USA news’ devolution into the bloated carnival of idiots on show it is today. The problem is that this subject matter accounts for only about half of the film’s running-time. The rest of the movie is made up of the aforementioned blindness-recovery arc, an over-indulgent prologue, and boring scenes of Steve Carell’s Brick Tamland finding love.

Ultimately, A2 is a disappointment compared to its predecessor because it too crosses the line between stupid and clever. The separation between these two areas depends on Ferrell and McKay’s willingness to abandon juvenile gags for effective satire. The fine balance between funny and dumb just isn’t as refined as before, and thus, Anchorman 2 doesn’t soar nearly as high as its predecessor.

While initially humorous, Steve Carell’s dating gag, like many of the jokes in A2, long overstays its welcome.

SUMMARY & RECOMMENDATION: Much of Anchorman 2’s departure from clever satire leaves the film’s comedic engine sputtering. The lighthouse episode is particularly stupid. The story takes too long to build up steam and drags its feet during the epilogue as well. Several characters are as lame as the bad jokes.

— However… when it sticks to it, Anchorman 2‘s clever satire of 24-hour news networks and the cable news’ dependence on ratings rather than journalistic merit is spot-on. Some of the non-satirical gags are funny, such as the slapstick car accident near the beginning and Carrell’s appearance at his own funeral. The news team-brawl at the end is fun, well directed, and features some much needed visual humor.

? I never thought I’d see Kanye West or Drake in something that I didn’t totally hate.